Sarita Brown and Deborah Santiago met while working for the U.S. Department of Education in the late 1990s. It was around the time the federal government started granting funds to colleges and universities with large numbers of Hispanic and Latino students, which put so-called “Hispanic-serving institutions” on the map.

The two women have dedicated their careers to making sure those institutions — and others — are living up to that description through their Washington, D.C.-based nonprofit, Excelencia in Education. Using data, research and hands-on help for schools educating Latino students, they have been keeping higher education accountable for the last 16 years.

“We are explicit about the accelerating of Latino student success,” says Brown, Excelencia’s president. “We founded (Excelencia) to work with those who are ready and willing to hold themselves accountable for producing better results.”

For starters, that meant defining what “serving” should look like.

“Sarita and I have seen that you shouldn’t assume that just because people comprise the majority of a college’s enrollment that the majority is served well,” says Santiago, Excelencia CEO and self-proclaimed “data nerd.” “You could have 50% of your students be Hispanic, and you do the same thing you’ve always done.”

“If schools really want to serve Latino students intentionally, they have to address equity,” Santiago says. "There’s no way around it.”— Deborah Santiago, Excelencia CEO

According to Excelencia figures, 539 schools met the enrollment threshold to be deemed Hispanic-serving institutions (HSIs) in 2018-19, meaning their full-time student population is at least 25% Latino. Another 352 are considered emerging HSIs, a term popularized by Excelencia and now widely used to describe institutions with a Latino student population between 15 and 24%.

Excelencia contends that fewer than half of the schools are intentional about their service to Latino students. “If schools really want to serve Latino students intentionally, they have to address equity,” Santiago says. “There’s no way around it.”

Excelencia measures how schools are stacking up across three broad categories: data, practice and leadership. The organization investigates how well schools are enrolling, retaining and graduating Latinos. Other areas of focus include financial support and faculty diversity. “These are areas where institutions can have a better impact to transform and better serve students,” Santiago says.

Excelencia has been highlighting successful schools and programs for years in its Examples of Excelencia, using data to show what’s really working on campuses, and how other schools can implement similar interventions.

Recently, it took the work further by launching a new Seal of Excelencia. This rigorous certification program recognizes schools that are successfully serving Latinos. The Seal, now in its second round of applications, is highly sought after by HSIs and non-HSIs alike.

“(Excelencia) tirelessly advocates on behalf of Latino students and is constantly sharing examples of best practices, of good behavior,” says William F. L. Moses, managing director of The Kresge Foundation’s Education Program, and a funder that Excelencia deems a “vital supporter.” “With thousands of colleges in the United States, you can’t really hope to make change by just working with individual colleges one-by-one. Rather, you need to have a systemic approach that identifies best practices and highlights those practices broadly, which is what Excelencia does.”

Before Excelencia came on the scene, it wasn’t unusual for Latino students to be characterized as “high school dropouts, English-language learners and undocumented immigrants,” Brown says. 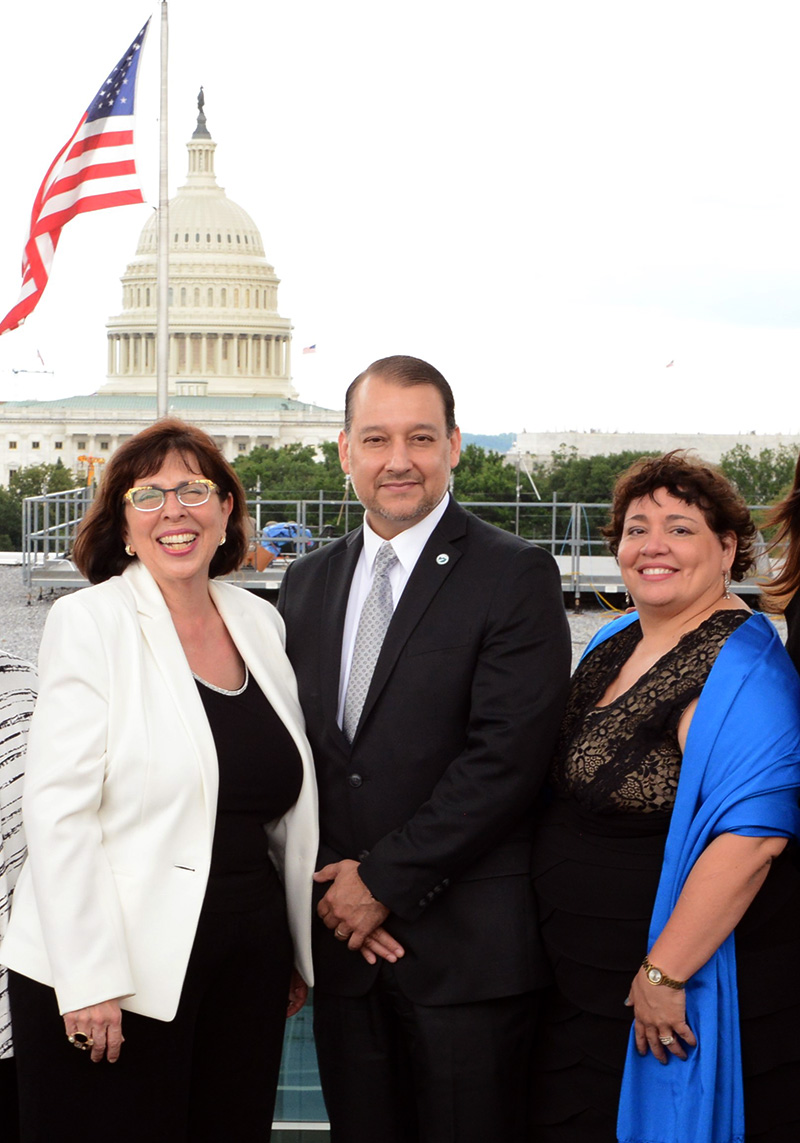 In 2000 — four years before Excelencia was founded — just 22% of Latino 18- to 24-year-olds were enrolled in college, compared to 39% of their white peers. Additionally, 15% of Latino 25- to 29-year-olds had obtained an associate degree or higher, while the same was true for 44% of their white counterparts, according to U.S. Department of Education statistics.

Excelencia’s founders understood what others had not yet embraced: that Latino students are more likely to attend community college, enroll part-time and not be as academically prepared or financially equipped as their peers, who fit the more traditional student profile.

“That actually is more indicative of the post-traditional student,” Santiago says. “Institutions that are not adapting to serve that profile of student are not effectively serving, from our perspective.”

She and Brown started Excelencia to give Latino students a voice and to work to reduce equity gaps. With their first research publication in 2004, “Latino Student Success at Hispanic-Serving Institutions,” they started reframing the conversation. When they released their “How Latino Students Pay for College” publication in 2005, people — including policymakers — were starting to notice.

“People hadn’t talked about Latinos in higher ed with anything other than demography and HSIs. And we went there,” Santiago says. “That felt like quite an accomplishment.”

By 2018, the latest year for which federal data is available, 36% of Latinos between 18 and 24 had enrolled in college; the percentage of 25- to 29-year-olds who had earned degrees had more than doubled to 31%.

While it isn’t possible to quantify exactly how much of that growth can be attributed to Excelencia, Brown and others familiar with the organization are confident their work has played a role. That’s especially true when it comes to sparking specific discussions about what’s working on campuses and gaining the support of institutional leaders — and the public — who want change.

“I don’t think we’d be talking about ‘serving’ without Excelencia,” Brown says.

Even as more and more organizations rise up and take on the charge of bettering Latino student achievement, Brown is certain that as long as equity gaps persist, there’s still a place and a need for Excelencia.

“Institutions that are not adapting to serve that profile of student are not effectively serving, from our perspective.”— Deborah Santiago, Excelencia CEO

“Every day we are saying, ‘It is unacceptable to live with this equity gap, and it is the responsibility of institutions to play a leadership role and to engage and serve this population,’” she says. “Deborah and I are not backing off on this one. We’re just not.”

That determination and unwavering mission is a big reason for the organization’s success, says El Paso Community College President and Excelencia board member William Serrata.

Though Brown and Santiago have likely been given many opportunities to focus their research on the bigger higher education picture, they’ve never strayed from their “laser focus,” he says, adding, “That is what drives their work, day in and day out, and it has brought national attention to this particular work.”

Indeed, Excelencia’s equity-based approach has had ripple effects for other student populations that include first-generation college students, those with low incomes and other underrepresented populations, who are the Kresge Education team’s priority.

“Excelencia is, without question, an invaluable partner in our efforts to expand educational opportunity,” Moses says. “With each campus partnership and countless data-driven insights, Excelencia is accelerating Latino student success.” 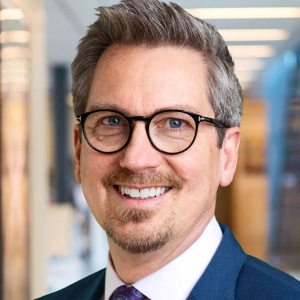 Striving for Equity: Degree by Degree

Our commitment to increasing equitable higher education access and success is the cornerstone of our grantmaking. We believe that a more equitable higher education system is one that enables historically underrepresented students — Black, Latino, Asian and Pacific Islander, Native American, first-generation and students from low-income households — to realize the promise of a college education at similar rates as their white or well-resourced peers.

For most graduates, degree attainment is tantamount to increased opportunity and economic security. Today’s students pursue college degrees alongside caretaking, professional and other responsibilities. Access is simply not enough. Targeted supports, alongside equity-driven institutional practices, are critical to helping our students persist and earn degrees.

In 2019, we proudly partnered with several organizations that share our commitment to promoting more equitable educational outcomes.

The Thurgood Marshall College Fund, for example, is exploring innovative strategies to help former historically Black college and university students who stopped short of earning a degree restart their studies digitally and cross the degree-completion finish line. Excelencia in Education, featured in this report, continues to provide targeted technical assistance to colleges to help them enact policies to boost educational outcomes for Latino students. And our Boosting Opportunities for Social and Economic Mobility for Families (BOOST) initiative, a joint endeavor with Kresge’s Human Services team, aims to strengthen partnerships between human services nonprofits and community colleges. These partnerships will connect people living with low incomes in cities to human service supports and educational pathways that advance social and economic mobility.

Working with our partners, we’re constantly examining where equity gaps exist to deploy resources in targeted ways to expand opportunities for the students we are humbled to serve.

One Student at a Time

El Paso Community College President William Serrata has been relying on Excelencia in Education’s research and work in the field of higher education since the organization was founded 16 years ago.

Serrata first heard of Excelencia while working at South Texas College. The organization was highlighting early-college high schools that made it possible for students to earn an associate degree while attending high school. Serrata was able to bring the resulting methods and best practices to his campus and build a similar program. At the time he was also a doctoral student writing his dissertation on Latino men in higher education — or, as he says, “more accurately, the lack thereof.” So he began to rely heavily on Excelencia’s data and research.

“The data that is produced on a regular basis by Deborah (Santiago) and Excelencia is just outstanding. The data is critical (for) ensuring that we’re making ... the best decisions in order to facilitate and impact student success.”— William Serrata, El Paso Community College President

A few years later he became president of El Paso Community College — one of the institutions that had piloted the early-college concept with The University of Texas at El Paso (UTEP). Excelencia paired Serrata with a more seasoned leader, Diana Natalicio, who was the UTEP president. She would serve as his mentor and role model.

“It’s both personally and professionally that I have used (Excelencia’s) resources,” says Serrata, who now serves on the nonprofit’s board of directors.

Serrata’s work has had tangible effects on accelerating the success of Latino students, which is Excelencia’s mission. Drawing on the history and the data Excelencia had made available, his team at South Texas College was able to consider similar types of systems and support. By the time Serrata left South Texas College, 12 high schools were participating in the early-college program modeled after the work in El Paso. He considers Excelencia the “conduit” of that work.

“We were able to utilize those and say, ‘OK, our population in South Texas is very similar,’ and, as a result, utilized the best practice and evidence-based practice, and we saw the same thing,” Serrata says. “We saw that educational attainment level was able to increase.

“You were able to create that college-going culture because you were getting them while they were still in high school.” Excelencia’s partnership with institutions has sparked system-wide and equity-driven approaches to student success.

“The data that is produced on a regular basis by Deborah (Santiago) and Excelencia is just outstanding,” he says. “The data is critical (for) ensuring that we’re making good decisions — the best decisions — in order to facilitate and impact student success.”